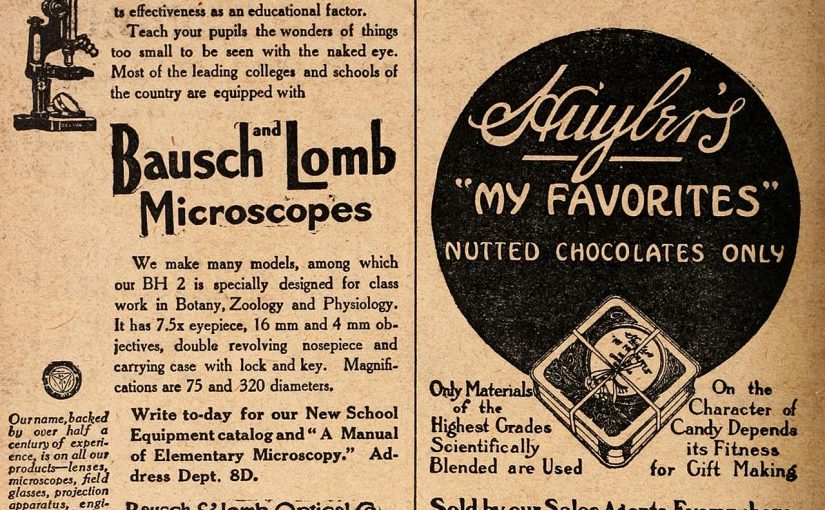 For my current research, I’m reading every issue of the American Popular Science Monthly from the early decades of the twentieth century. Despite its title, PSM was rather a serious magazine, about 100 pages a month with lots of long, technical articles on everything from how street cars (trams) work to the role of mosquitoes in spreading disease. In the October 1911 issue, amongst the usual adverts for typewriters, microscopes and (for some unaccountable reason) chocolate, I found an article called “The race fibre of the Chinese”, which demonstrates (depressingly) that the past is not such a foreign country after all.

Immigration was something of an obsession for the PSM (as it was for many Americans at this time) and, predictably, there were lots of articles about the declining native birth rate and the threat of “degeneration” if too many inferior people were admitted to the USA. However, the PSM tended to take a fairly liberal line, arguing that many of the people arriving via Ellis Island (Jews were singled out, but so were other groups) were of higher than average intelligence, and if efforts could be made to address the poverty that was caused by discrimination, they would be a valuable addition to America’s stock.

The Chinese article (by Professor Edward Alsworth Ross of the University of Wisconsin) begins by noting that “Out of ten children born among us three, normally the weakest three, will fail to grow up. Out of ten children born in China these weakest three will die and probably five more besides. The difference is owing to the hardships that infant life meets with among the Chinese”. This was, however, not a plea for increasing charity or foreign aid. On the contrary. Ross argued that these horrifying statistics explained why the Chinese were exceptionally tough and hardy, capable of very hard physical labour.

One might therefore assume that the Chinese ought to be admitted as very welcome immigrants, but Ross argued that the key to Chinese success was not any innate superiority. Far from it: “the competition of white laborers and yellow is not so simple a test of human worth as some may imagine”, since if each are provided with equally good working conditions (including a good diet), the white man will triumph. However:

Under bad conditions the yellow man can best the white man, because he can better endure spoiled food, poor clothing, foul air, noise, heat, dirt, discomfort and microbes. Reilly can outdo Ah San, but Ah San can underlive Reilly. Ah San can not take away Reilly’s job as being a better workman; but, because he can live and do some work at a wage on which Reilly can not keep himself fit to work at all, three or four Ah Sans can take Reilly’s job from him.

Pity the poor-old stereotyped Irish labourer; even his proverbial willingness to live on nothing but potatoes won’t save his job from the clichéd Chinese hordes, whose teeming and inscrutable ability to live of nothing but fresh air will lead to their taking the Irishman’s job.

But “Reilly” can at least take comfort from the fact that “Ah San’s” days of dominance are numbered: “with the coming in of western sanitation, the terrible selective process by which Chinese toughness has been built up will come to an end”. This is a novel variant on what I’ve come to think of as the “paradox of civilization” argument for degeneration: human progress is the result of natural selection – the fittest survive and conquer the unfit, but that progress is also their undoing.

(It is, of course, no coincidence that natural selection emerged as a scientific theory in Britain at a time when it possessed the world’s largest empire. Indeed, much of Darwin’s success can be traced to the fact that many of his fellow countrymen chose to read him as having said that they were the fittest and thus had survived. Britain’s right to rule the waves was guaranteed by a law of nature.)

However, the paradox is that as humans progress they become civilized, their living standards rise and life becomes too soft. Worst of all (according to the prophets of degenerative doom), civilised people become more compassionate, and thus take care of the weak, the sick, the mentally ill and others who would once have perished in the struggle for existence. Since these inferiors lack the moral fibre and foresight to avoid having hordes of children they cannot afford to feed, they proliferate at the expense of their hard-working and prudent superiors. Evolution goes into reverse and degeneration ensues. (This argument, of course, provided the main foundation for the eugenics movement.)

However, Professor Ross – who was a supporter of eugenics – offered a new twist on what was then a well-established argument. He thought that the hardy Chinese would eventually be undone by their success at stealing other people’s jobs; their living standards would rise, they would be weakened by civilisation itself – the fatal lure of “western sanitation” would make them soft and fussy about their living and working conditions, and hence their unfair advantage in the labour market will be undermined. However, he admits that “It will take some generations of exposure to the relaxing effects of drains, ventilation, doctors, district nurses, food inspectors, pure water, open spaces and out-of-door sports to eradicate the peculiar vitality which the yellow race has acquired”.

And what, you might wonder, is Professor Ross’ conclusion from his argument? Should America have been shipping nurses, flush toilets and baseball bats to China as quickly as possible to accelerate the process of decay, or should it be denying these advantages to its own working population before they could get even softer? Neither. Ross argues that “During the interim the chief effect of freely admitting coolies to the labor markets of the west would be the substitution of low wages, bad living conditions and the increase of the yellow race for high wages, good living conditions and the increase of the white race”. So, naturally immigration restrictions were vital. What is really depressing, is that Ross was considered a ‘progressive’ eugenicist, becasue his racism was aimed at preserving American workers’ living standards.

Isn’t a good thing that such self-evidently racist. inhumane and ridiculous arguments no longer have any sway with Americans, or anyone else…