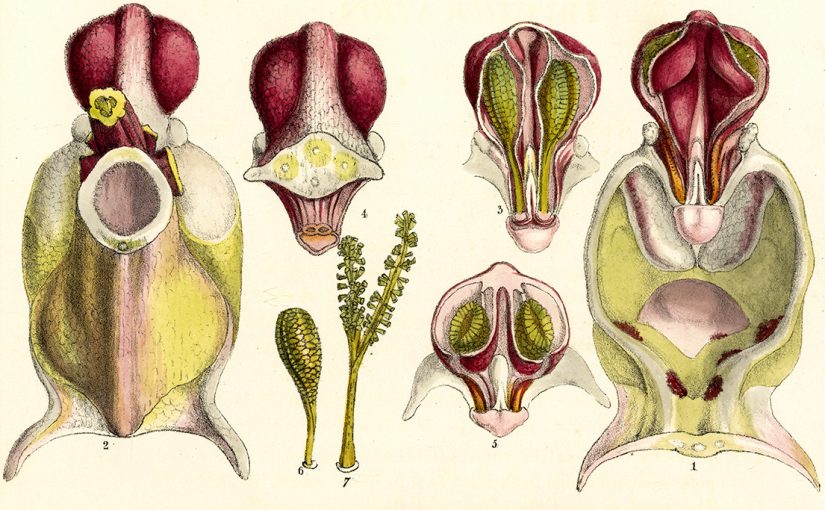 Published by the University of Chicago Press and the Royal Botanic Gardens, Kew

Winner of the 2018 History of Science Society Watson Davis and Helen Miles Davis Prize for best book for a general audience.

The name orchid comes from the Greek orkhis, a testicle, because of the visual similarity between their double bulbs and the most vulnerable part of the male anatomy. This association, combining potency with fragility, has shaped many of the ways in which the orchid has been imagined.

According to ancient Greek myth, Orchis was the son of a nymph, from whom he received divine beauty, and a satyr, who gave him a powerful libido. Orchis tried to rape a priestess and was torn to pieces by wild animals and the flower that bears his name grew from the bloodied remains of his testicles, the ultimate cause of his fate, which became the plants tubers. At least, that is supposed to an ancient Greek myth, but as the book demonstrates it’s an early eighteenth-century invention, the product of the playful (and often erotic) of Enlightenment France, where serious science and literary imagination were often mingled. However, once the story was translated into English, it lost its original story, became mistaken for a genuine myth, and has been repeated endlessly ever since. It echoes through many of the literary uses of orchids. For example, there’s a dramatic contrast between delicacy and sexual corruption in James Hadley Chase’s notoriously violent novel No Orchids for Miss Blandish. Chase’s title evokes the expensive, fragile quality of the heiress, Miss Blandish, who is kidnapped and raped by the psychotic protagonist.

The European discover of the New World marked a new chapter in the orchid’s history. Important groups of orchids, especially epiphytes (orchids that grow on trees but are not – contrary to common belief – parasites), were first discovered and became the focus of the collector’s passion. From the late-eighteenth century, owning orchids became a form of conspicuous consumption, like serving your dinner guests exotic tropical fruits such as the pineapple. A growing culture of luxurious consumerism in Europe, combined with the growing reach of trading and imperial networks, created an extraordinary passion for collecting orchids. Inspired by the mania, collectors went off to some of the most remote and inhospitable corners of the earth in search of new and unknown species. So intense did the competition become, that some collectors who discovered a novelty would collect all they could carry and then destroy every plant they could not, to prevent anyone else finding it.

The science of orchids

Alongside their literary and cultural meanings, orchids are also scientifically fascinating. The British botanist, John Lindley (often regarded as the father of modern orchidology), was deeply puzzled by one that was presented to him by the botanist Robert Hermann Schomburgk (1804–65). The flower appeared to be three distinct species (Catasetum tridentatum, Monachanthus viridis, and Myanthus barbatus) all growing on a single plant. Understandably, Lindley commented that “such cases shake to the foundation all our ideas of the stability of genera and species”. It was not until 1862 that Charles Darwin cleared up the mystery when he presented a paper at the Linnean Society in which he showed that the orchid’s three radically different flowers (which had resulted in their classification into distinct genera), were in fact three sexual forms (male, female, and hermaphrodite) of a single species. 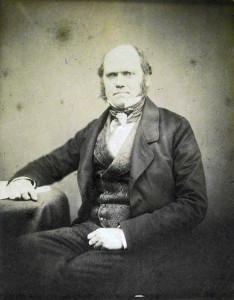 After Darwin published his masterpiece, On the Origin of Species (1859) his next book was on orchids (On the various contrivances by which British and foreign orchids are fertilised by insects, and on the good effects of intercrossing, 1862). This might seem like a much-deserved break from evolution (and from publishing books with even vaguely commercial titles), but in fact Darwin’s Orchids provided crucial evidence that persuaded increasing numbers of his fellow men of science both that evolution by natural selection was true, but – equally importantly – that it created exciting new possibilities for botanical research. Using no equipment more elaborate than his greenhouse and imagination, Darwin investigated the fertilisation of orchids, in an effort to understand their extraordinary variety of pollination mechanisms. He discovered that many species had their own unique species of insect pollinator. Plant and orchid had slowly become adapted top each other’s forms until the fitted like a lock and key, until only one species of insect could fertilise any given species of orchid. Darwin argued that evolution by natural selection explains this: the insects benefit by having exclusive access to the nectar of their species, while the plants benefit because their pollen will only be spread to other members of the same species, not wasted on plants it could not fertilise. These mutual benefits would accrue in tiny steps as the structures of plant and insect varied randomly and were then sifted by natural selection. It was an example, in effect, not of the survival of the fittest, but of the best-fitting.

Darwin’s friend, the US based botanist Asa Gray, congratulated him on the book, describing it as an elegant “flank movement on the enemy”, since orchids were a favourite example used by natural theologians to illustrate God’s supposed love of extravagant, gratuitous beauty. In undermining this argument, Darwin turned one of the theologian’s favourite cases into the pin-up flower for evolution.

Orchids at the movies 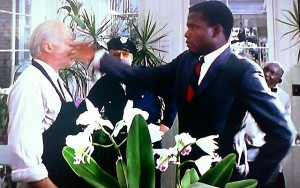 In addition to literary orchids – from Shakespeare to Marcel Proust and Raymond Chandler – the book will also look at orchids in the movies, such as the Sidney Poitier/Rod Steiger movie, In the Heat of the Night (dir. Norman Jewison, 1967) includes a scene in an orchid greenhouse. The out of town homicide detective, Virgil Tibbs (Poitier), accidentally becomes involved in investigating a murder in the Southern town of Sparta Mississippi. He finds a piece of Osmunda fern-root in the car of a murdered man and knowing that it is used to grow orchids, he takes the redneck police officer Gillespie (Steiger) to interview the deeply racist, wealthy cotton farmer, Endicott, who is a keen orchid grower. Pleasantly surprised to discover that Tibbs knows about orchids, Endicott asks if he has any favourites and Tibbs mentions the epiphytes. This, says Endicott, is peculiarly appropriate because they “like the negro” are delicate plants that need great care. When Tibbs tries to cross-examine Endicott, the white man slaps his face and Tibbs slaps him back; Gillespie is too surprised to know how to react. When Endicott says “you saw it”, he replies, “I saw it, but I don’t believe it”. The scene caused a sensation when the film was released: many African-American audiences cheered, while their white contemporaries (often in segregated cinemas) sat in stunned silence. The visual contrast between the Poitier’s height, physical strength and beauty, and the shrunken, frail and emotionally wounded Endicott elegantly subverts the racial hierarchy that Endicott has tried to erect.

Finally, the book will look at the what may be the world’s longest-running study of plant ecology (certainly the longest-running study of an orchid). In 1975, a team from the University of Sussex led by Professor Mike Hutchings marked out twenty square metres of chalk downland at the Castle Hill nature reserve, just outside Brighton. Every year, for the next 32 years, Mike and his colleagues returned to the site to meticulously plot the position of every early spider orchid (Ophrys sphegodes) growing there. As a result, they discovered an extraordinary web of relationships between the plants, the bees that pollinate them, the European Union’s agricultural subsidies (which almost drove these plants to extinction), and climate change, which may be finishing the job the EU failed to.

In addition to their many other symbolic associations, orchids are now a sensitive barometer of climate change; just another reason why they continue to fascinate us.