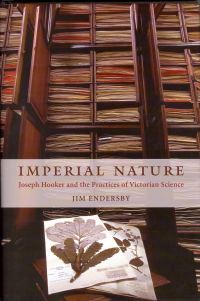 Joseph Hooker and the practices of Victorian Science

My first academic book – Imperial Nature: Joseph Hooker and the practices of Victorian science – was published in May 2008 by the University of Chicago Press; a paperback edition was published in Autumn 2010). The book was shortlisted for the international History of Science Society’s Suzanne J. Levinson Prize. It was awarded the Stafleu medal by the International Association for Plant Taxonomy in 2011.

The book uses the career of Joseph Dalton Hooker to explore three of the major themes in the historiography of Victorian science: the reception of Darwinism; the consequences of empire; and, the emergence of a scientific profession. Each of its nine thematic chapters looks at a particular scientific practice – such as travelling, classifying or writing – and examines its role in Hooker’s work and its broader significance as a way of placing science within the rapidly developing social world of nineteenth-century Britain.

The Journal of the History of Biology reviewed the book in January 2010, and their reviewer, Sandra Herbert, commented that ‘it is clear that Joseph Hooker was an influential man of science, and that, in a fascinating and subtle study, Jim Endersby has brought us deeper into his world”.

The Journal of British Studies reviewed the book in January 2010, commenting that Endersby’s ‘sophisticated attention to the impact of daily scientific practice forces us to reevaluate our understanding of, and historiographical approach to, Victorian British natural history. It will provoke and inform much fresh research’.

The book also got a very favourable review in Nineteenth-Century Contexts in September 2009.

The British Journal for the History of Science reviewed the book (March 2009), and commented that Endersby “tells us definitively about the vexed meaning of ‘professionalization’ in the Victorian period, the place of experiment and observation in natural history, the role of mapping and publishing and publicizing – all supported by astonishing detail from published and archival material. A short review cannot come close to doing Imperial Nature justice”.

The journal Victorian Studies reviewed it (Autumn 2008), describing it as “a remarkable, deeply researched, multidimensional study” adding that Endersby’s “views will invite controversy while at the same time requiring other historians of the culture and practice of Victorian science to reconsider many of their existing presuppositions. This is a book to be read and pondered”.

The Times Higher Education reviewed the book on 24 July, describing it as a “fascinating study”.

Science (7 Nov 2008) commented: “Endersby give us a detailed, scholarly account with a deeper point: that science is about more than the grand battles of competing ideas. In doing so, he provides a richly textured account of a period in which the status of natural science was far more precarious than it is today. And the book will hopefully stand as a reminder, during next year’s Darwin celebrations, of just how many unsung individuals contributed to the scientific progress of the age.”

I used to run a website on Hooker, but I have handed it over to the Royal Botanic Gardens at Kew.