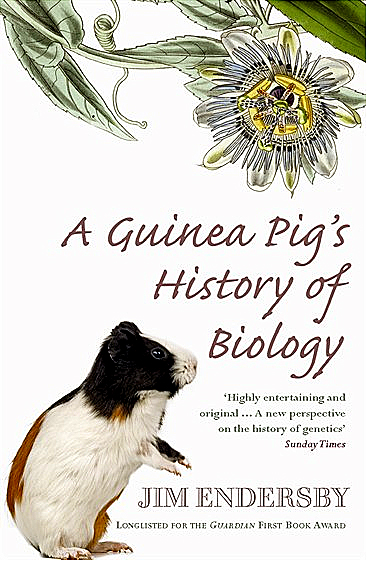 (An extract from the first chapter)

The right honourable George Douglas, FRS, 16th Earl of Morton, was perplexed; in 1820, he had sold a chestnut-brown mare to his friend, Sir Gore Ouseley, who had crossed her with ‘a very fine black Arabian horse’. Both Morton and Ouseley were astonished by the offspring of this union, two foals who were clearly Arabian horses, but ‘both in their colour, and in the hair of their manes, they have a striking resemblance to the quagga’.

Quaggas were a kind of zebra, but it was mainly their heads and shoulders that were striped. They belong to a small, sad club (whose members include the passenger pigeon and the thylacine, or Tasmanian tiger) of animals for whom we know the exact day on which they became extinct. The last quagga died in Amsterdam zoo on 12 August 1883. At the time, the species went unmourned, as no one realized she was the last one. Why should the offspring of Ouseley’s animals look like quaggas, when both parents were horses? Morton had a theory. A few years earlier, he had owned a male quagga which he had hoped to domesticate. But like the other zebras, quaggas are practically untameable – bad-tempered and stubborn, zebras not only bite, they refuse to let go – even today, more zookeepers are injured by zebras than by lions or tigers. The indigenous people of South Africa had never managed to ride them and thus Europeans were not met by troops of African cavalry when they started their encroachments. (The history of Africa might have been rather different if zebras were as tractable as Eurasian horses.)

Morton had been ‘desirous of trying the experiment of domesticating the Quagga’. In the late eighteenth and early nineteenth centuries, Africa’s diseases proved the biggest obstacles to European efforts to colonize the continent. Among the many scourges the whites faced was sleeping sickness, which attacked both Europeans and their horses. Zebras and quaggas are largely immune to the disease, and Morton seems to have been one of a number of Europeans interested in cross-breeding them with horses to produce a hybrid that would be better adapted to African conditions. In 1788, the German naturalist Johann Georg Gmelin observed that the quagga was ‘thicker, and more strongly made than the Zebra, and is more tractable, having sometimes been broken to the draft’. During Morton’s lifetime, a traveller to South Africa reported that his host kept ‘a tame quagga . . . for the purpose of making experiments in improving his breed of horses’. But reports of the quagga’s temper and tameability were mixed: a few years after Morton’s experiments, a British naturalist observed that the one he had seen ‘is not very docile, being much more wild than the Zebra’. While another commentator suggested that it might nevertheless be possible ‘to reclaim this creature, and to subject it to the service of man’.

Morton acquired a male quagga and crossed it with a chestnut mare. He described the result as a female horse ‘bearing, both in her form and in her colour, very decided indications of her mixed origin’; she had evidently retained either her father’s stripes or his filthy temper – probably the latter, since Morton seems not to have repeated the experiment. However, it was the same chestnut mare, the quagga’s former mate, which Morton had sold on to Ouseley. And it was this mare that then produced further quaggalike foals – even when she was mated with a perfectly ordinary horse. Her foals had striped legs and stiff, short manes that stuck straight up like a zebra’s, instead of hanging down like a horse’s. Stripes do occur occasionally in breeds of domestic horses, but are very rare in Arabians; neither Morton nor Ouseley had even seen manes like these on a horse before. It appeared as though the mare’s encounter with the male quagga had permanently altered her, leaving some indelible imprint of ‘quagga-ness’ that affected the offspring of her later matings.

This incident struck Morton as sufficiently unusual that he brought it to the attention of his friend William Hyde Wollaston, president of the Royal Society of London (of which Morton himself was a fellow). In 1821, Morton’s letter was published in its journal, the Philosophical Transactions, under the modest title ‘A Communication of a Singular Fact in Natural History’. The notion that a male could influence the female’s subsequent offspring by other males was not new, but had typically been dismissed as little more than folk myth. Now, however, lent authority by the influential members of the prestigious Royal Society, the quagga effect became an established – if ‘singular’ – scientific fact.

Nearly fifty years after Morton published, even Charles Darwin remained convinced that ‘there can be no doubt that the quagga affected the character of the offspring subsequently begot by the black Arabian horse’. He referred to the case as one of the crucial puzzles he needed to solve when trying to devise a theory of biological inheritance. Darwin, like others struck by Lord Morton’s mare, believed that the male quagga had made some sort of lasting impression on the female horse. By some unknown means, the character of his species had left its mark on her, but no one knew how: was it, as some thought, a mental impression, an idea of quagga-ness that the mare retained in her mind? Or was it something tangible, some particle or fluid in the male’s semen or blood that had been passed on and retained? Might the male subsequently lose interest in female quaggas and pursue only mares?

This book is about how some of these mysteries were unravelled. Long before Darwin, most people knew that for most organisms, as for humans, both males and females were needed to produce offspring, but even after centuries of investigation and speculation, no one knew exactly why, nor exactly what each contributed to their progeny. Given that some creatures managed without sex, what was its purpose? And what about inheritance? Why do most children look like their parents, while some are more like one of their grandparents? How are the characteristics of animal or plant breeds passed on and preserved over generations? And, given that creatures only ever give birth to creatures of the same species, where do new types of organisms come from? Given that species remain largely constant over generations, how and why do they sometimes vary? Lord Morton’s explanation of his mare’s striped foals may appear unlikely, even ridiculous, as may many of the later attempts to resolve his puzzle. To understand how and why they made sense at the time, we need to be aware of the centuries of thinking about reproduction that had preceded Morton’s experiment.